Canine Breeds of the World – Akita

Canine Breeds of the World – Akita

The Akita is a native large breed spitz from the northern, mountainous Akita Prefecture, Japan. A courageous and devoted dog, Akita are protectors of their family. Originally, Akita were bred for deer, elk and bear hunting. They also often stayed home and watched over the children, while parents worked the rice fields. In 1931, Akita were declared a Japanese National Monument. In 1937, during a visit to Japan, Hellen Keller spoke of how she admired the breed and wished to have her own. She was gifted an Akita puppy, Kamakaze-Go, which upon returning to the United States, unfortunately died shortly thereafter from distemper. She was then sent his brother in the litter, Kenzan-Go.

Akita have a long and difficult history, between being crossbred with mastiffs for dog fighting to almost being wiped out to extinction during World War II, when all non-military dogs were ordered to be culled for meat and pelts. The few survivors were often released into the mountains or cross bred with German Shepherds, so they could be claimed as military dogs. After the war, two main studs were bred from, Dewa-Go (day-wa-go) and Ichinosekitora-Go (e-chi-no-sei-key-to-ra-go). The Dewa line had also produced another sought after stud, Kongo-Go. His is the line from which Hellen Keller’s dogs originated. Efforts were started in Japan to return the Akita to National Monument Status, where as in the United States, lines were bred from the “German Shepherd type” dogs in Kongo-Go’s line.

The result was dogs with very distinct differences. A breed spilt of American Akita and Japanese Akita is recognised throughout the world, with the exceptions of the United States and Canada. The Japanese Akita or (Akita-ken/Akita-inu) are leaner dogs, with males at a height of 61-70 cm at the shoulder and weighing in at 34-54 kilos and females slightly smaller. The only acceptable coat colours are red, fawn, white, sesame and brindle, with white markings called Urajiro (u-ra-g-ro) on the chest, belly, insides of the legs and the cheeks. 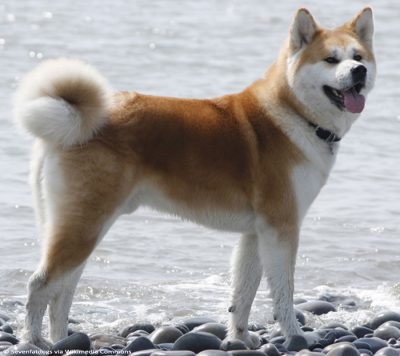 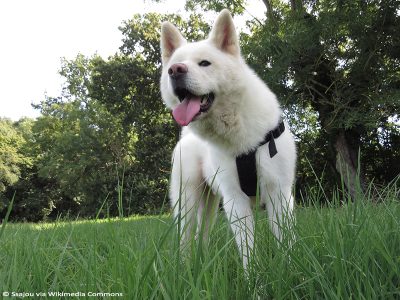 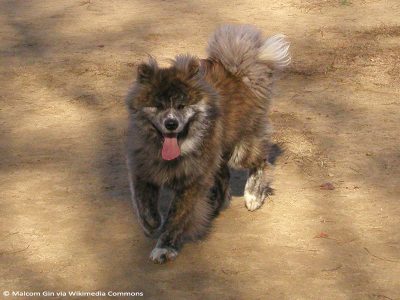 The American style Akita is larger and thicker with males measuring in at 66-71 cm at the shoulder and 45-59 kilos and females slightly smaller. Additonal coat colours are accepted, including various colours of pinto coats and black face masks. They are also not required to have Urajiro markings. No matter which breed, it is agreed they must have dark, almond shaped eyes and an unshakeable temperament. Both breeds have a thick, heavy shedding, double coat which drops undercoat twice a year and are able to produce long-haired variations.

The thick coat makes colder environments ideal for the Akita. They are a headstrong and intelligent breed, which requires firm training, making them not a breed for the novice owner. A very clean and cat-like dog, they are easily housetrained. A well trained Akita can live in a household with children and other dogs, though they tend to do better when paired with dogs of the opposite sex. Due to a strong prey drive, they are not recommended for households with cats or other small pets or birds. They are very loving and devoted to their families, but aloof and distant with strangers. They prefer to be indoors where the action is, and will often follow their owners around during the day, truly a part of the family.

oth breeds of Akita have an unfortunate amount of health concerns, most likely from the small pool of genetics available to breed them after World War II. As a result, they are susceptible to allergies and immune issues. They may also have eye conditions, hip and/or elbow dysplasia, an adrenal gland issue called Cushing’s Disease and a blood clotting problem called Von Willebrand’s Disease. They tend to be sensitive to vaccinations, drugs, insecticides, as well as anaesthetic  and sedative medicines. Akita also have unusual blood work due to psuedohyperkalemia, or leakage of potassium from the red blood cells. Care should be taken during annual vet visits. American Akita have been bred in Australia since the 1980’s, but the Japanese Akita was only recognised and imported in 2013. The Akita is a very special dog, which require a very special home.

**Note: This rare breed article was written by Emma Carbonetti, who waited three years and four months to obtain her Japanese Akita. In Winter of 2015 she found a breeder in Adelaide and her pup came home in January 2016. Hotaru, (pictured on Facebook and as the lead in image for this article when he was a puppy), is a lovely boy who displays all the breed characteristics mentioned. He also has the sensitive immune system of the Akita. Emma is a qualified dog trainer and has trained Hotaru to be the best Akita Dr Jedda has ever experienced.